"It is now that the true details are to hand of this incident we can now remember these airmen who, in the true light of that morning , with their devotion to duty  gave their lives" Ian Cheveralls

June 6th 1944, D-Day, it was the first mission of the day for the 394th Bombardment Group of the United States Air Force stationed at the Royal Air Force airfield at Boreham, Essex, England. Flying B-26 Marauder air-craft, the self proclaimed "bridge-busters"  flew attacks on bridges in Nazi-occupied France and the Low Countries. On D-Day Allied forces stormed the Normandy beaches of occupied France to turn the tide against the Nazi stranglehold on Western Europe. On that day the 394th’s mission was to bomb gun positions at Varreville on France’s northwest coast.

Flying above Gillingham, Kent at 5:30 am two bombers piloted by Lt Witcher Berger and Lt Claude W Kline collided mid air. Lt Berger’s crew all perished in the resulting crash after trying to jettison it bombs. Unfortunately this plane crashed into homes on Corporation Road in Gillingham resulting in the deaths of four civilians. Lt Kline and his crew all perished in the explosion when their plane crashed into the orchard at the East Court Farm.

Living close to Corporation Road, on Parr Avenue Gillingham was, the then nine year old father of Chris Ford. Mr. Ford recalls being woken up early by the B-26 which crashed close by, passed low over his house. He recalls it as being on fire which lit up the whole house. Typical as kids in those days, they ran to the crash site. It was that close. Mr. Ford remembers seeing the buildings destroyed and fires which "made the garden wall glow red". He was on the site the following day watching them remove the unexploded bombs and remembers seeing the bodies of the airmen. Chris and I had only just began the research for this web site when we realized that another accident very similar to this had occurred above Sussex about an half hour later and had involved two more B-26’s of the same 394th Bombardment Group.

At 6:00 am flying above Battle, Sussex, England another two B-26 Bombers piloted by Lt. Tommie Potts and Lt Thomas Jenkins collided mid air. Potts gave orders to jettison the bombs then order the aircraft abandoned. Potts bailed out and survived, but his crew died aboard the aircraft in an effort to jettison the bombs. Lt Jenkins and his crew all perished when their plane crashed and then exploded.

Five hundred yards from where the plane of Lt Potts crashed stood seventeen year old Ian Cheveralls who was on civil defense watch. He and seven other Civil Defence wardens witnessed the crash. Mr. Cheveralls and another watchman saw a parachute float to earth. They ran over to discover Lt Potts. During his lifetime Mr. Cheveralls was deeply affected by what he witnessed. Much misinformation was printed after the incident and Mr. Cheveralls felt compelled to do research in to the incident to  ensure the truth was told. Mr. Cheveralls was aided by his nephew Keith Cheveralls in the United States.  Their discoveries have formed the basis of this story and this web site. He was able to find some families of the airmen and the contributed not only  to Mr. Cheveralls research but also to this web site. Mr. Cheveralls commissioned a brass plaque in honor of these twelve men lost in Battle. It was dedicated at the Royal British Legion Hall in Battle on October 29, 2007.

We are fortunate to have received the personal recordings of Lt. Robert McCallum who flew a B-26 in this same mission that day. These documents were provided by Lt McCallum’s son John. Lt McCallum's account provides a vivid picture of what that mission was all about and the appalling conditions these brave men and encounter on that day.

June 6, 1944 (Ninth Air Force): 800+ A-20s and B-26s bomb coastal defense batteries, rail and road junctions and bridges, and marshalling yards in support of the invasion; 2,000+ fighters fly sweeps, escort for B-26s And C-47s, ground support, and dive-bombing missions over W France. During the preceding night and during the day over 1,400 C-47s, C-53's, and gliders deliver glider troops and paratroops, including 3 full airborne divisions, which are to secure beach exits to facilitate inland movement of seaborne assault troops. A total of about 30 aircraft are lost.

Note: This mission was in support of the 101st Airborne Division,502nd Parachute Infantry Regiment and 377th Parachute Field Artillery Battalion were dropped into DZ.A. and were tasked to seize Exits 3 and 4 at Saint-Martin-de-Varreville and Audouville-la-Hubert. Destroy the German heavy artillery battery at Saint-Martin-de-Varreville and the buildings coded WXYZ at Mezieres.

D-Day was my 58th mission. We knew it was the real thing this time, as they woke us at two in the morning for the briefing...showed us the messages from Roosevelt and Eisenhower, had the chaplain there to give us all automatic absolution .

I also remember the weather...it was terrible. We took off all right and formed into our groups of six, but at about 1500 feet, entered clouds so thick you couldn’t see the plane 10 feet to your left. All we could do was turn a little away from it and then go straight ahead and hope nobody ran into us. We finally broke through the clouds at 12,000 feet and all around us could see other B-26.s popping up out of the clouds. We formed again and took off. The clouds broke , but as we got near the channel, we had to keep going under them, so we were under 1500 feet then we got to the channel, where we got a real close up views of the thousands of ships all heading toward France. We were supposed to hit some big guns on the Cherburg Peninsula, guarding what I later learned was Utah Beach. It looked different bombing from such a low level after doing most of our bombing from 12,000, but we were not over land very long, so had no problems. We made another mission that afternoon to Vire, to bomb some railroad yards. 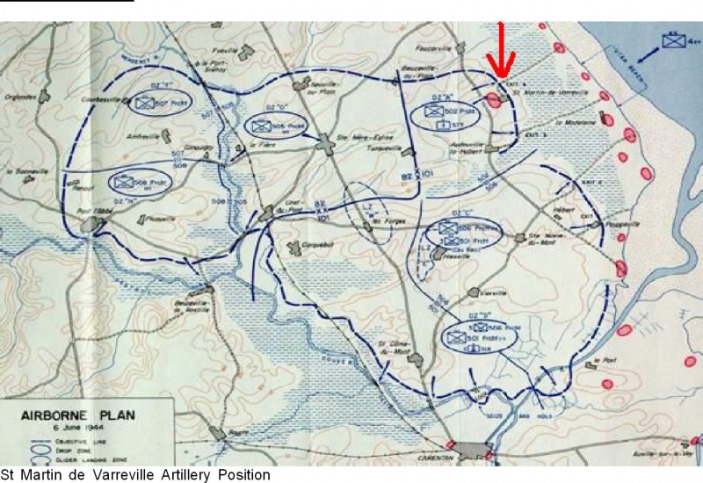 The Gillingham and Battle Crashes

On D-Day, June 6, 1944 at 5:05 am  while on route to this mission in France the 42-96263 was involved in a mid air collision with the 42-96050 over Gillingham, Kent, England. Poor weather was said to have been the cause of the accident. Weather at the time of the accident was reported as: Vis 7 mi, wind 8 mph, 7/10, light rain. The pilot of the 42-96263 was not flying on instruments at the time of the crash. Hearsay testimony of civilians in the vicinity on Gillingham, Kent  indicates that one aircraft was flying around beneath the overcast. The other aircraft came down out of a large black cloud and the two collided. No actual eyewitnesses were found. The 42-96050 jettisoned some of its bombs then crashed into homes on Corporation Road in Gillingham, killing the entire crew and four civilians. Six homes were demolished. The 42-96263 crashed into the orchard at the East Court Farm in Gillingham, Kent also killing all the crew.

Less then an hour later, at 5:30am the 42-107592 of the 584th Squadron collided with the 42-96249 of the 587th Squadron over Battle Sussex England. The bad weather had caused icing up of the planes. Pilots of both planes were flying on instruments at the time of the accident. Weather at the time was noted to be: Vis 7mi, wind 8 mi, 7/10 Stata Cumulus. Tommie Potts, the only person to survive either crash, had felt no distinct jar as would be in a collision.  He had stated the his aircraft kept veering to the left and at one point was on its back.  He instructed the Bombardier to jettison bombs and then gave the signal to abandon the aircraft.  The crew had gone to the bomb bay and Lt Potts, assuming that the Bombardier had left the doors opened, waited for a minute, lowered the nose wheel and bailed out.  The crew had worked feverishly to dump the high altitude bombs so that they would fall unexploded as the plane neared its crash landing. The 592 crashed at Whatlingon Level and the 249 crashed at Asbumham Place.

Standing below in Whatlingon Level was a young teenage, Ian Cheveralls, a messenger for the Civil Defense Air Warden. He was watching the planes flying through the clouds above when the crash occurred about 500 yards from where he stood.  Upon the crash he ran towards the planes and could hear Lt Potts calling out for his crew.  Ian aided in the rescue of  Lt Potts the lone survivor, the bodies of his crew were found in the bomb bay.

It should be recogonized that by the quick and professional actions of  Lt Tommie Potts and Lt Witcher Berger who both gave orders to jettison the bombs and the crew members who followed out these orders, civilian casualties could have been considerable in both cases. These men gave their lives and in doing so prevented this from happening. There was considerable damage suffered at Ashburnham place and the surrounding property when the bombs on board exploded. The crater this explosion left was so large that is is beyond doubt if a similar incident had taken place at Whatlington Level, Battle or Gillingham the results would have been  catastrophic.

Lt. Potts retired following the crash, sent home with a Distinguished Flying Cross. He would marry and raise a family. Tommie passed away in 1971.  The Battle, Sussex crash had been memorilized by a plaque commissioned by Ian Cheveralls placed in Battle at the Royal Legion Hall. The dedication reads:

THESE AMERICAN AIRMEN GAVE THEIR LIVES FOR OUR FREEDOM

The wreckage of the 42-96050 on Corporation Road, Gillingham
photos provided by Chris Ford 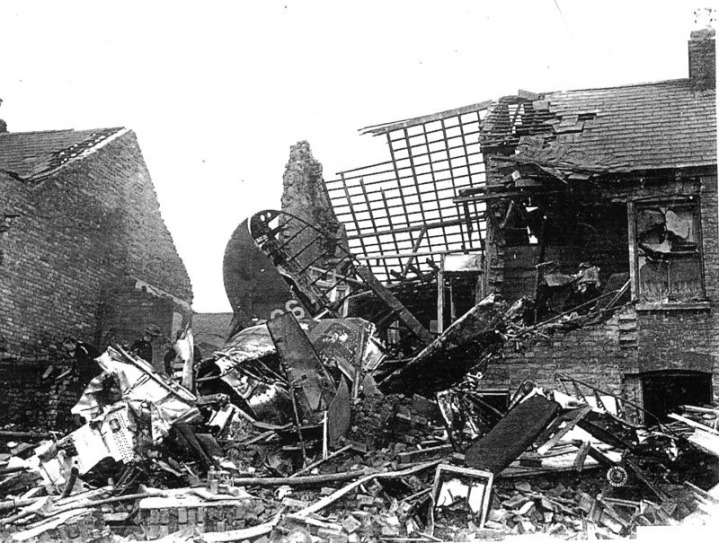 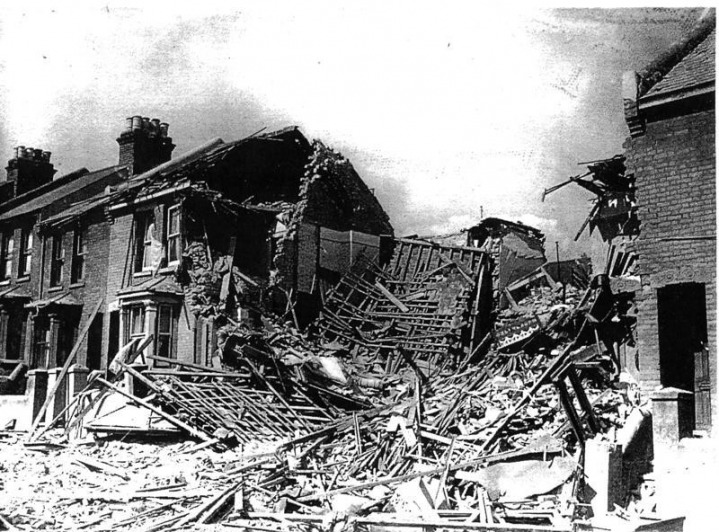 Civilians who perished in Gillingham as a result of the accident

The Memorial at Boreham Airfield in honor of the American Army Airforce
-photos taken by Ann Brooker
The 394th BG Remembered at Boreham
"Almighty God, we invoke a blessing upon this occasion.  Make us aware of the deeper significance of this meeting as we remember those members of the 394th Bombardment Group who gave their lives during World War II in their willingness to serve and strive for unity and peace with all men of good will.  Their success in war has allowed both of our nations to continue in peace to believe in the worth and dignity of the individual, the rule of law, basic human rights, free speech, free press and numerous other liberties." 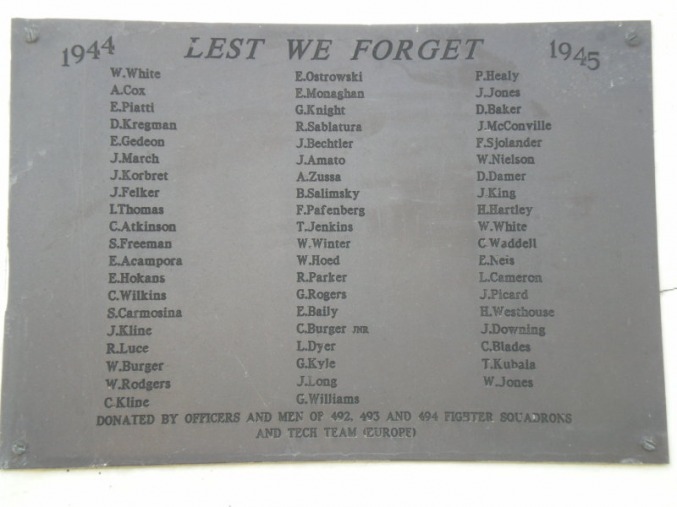 This site is owned, maintained and researched by Lori Oschefski
with contributions from
Ann Brooker, Ian Cheveralls and Chris Ford
please contact us for use of any material contained in this web site

The customized illustration of the B26 Marauder has been provided by artist Mark Styling
https://www.aviationillustration.com 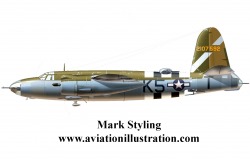