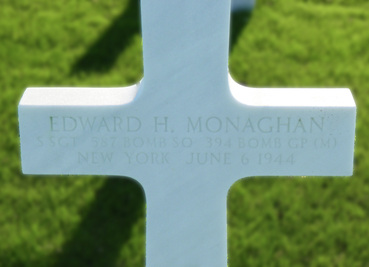 Edward H. Monaghan was born in 1916 in Monroe New York. He was the son of George and Ida Monaghan and the grandson of Hugh and Charlotte Monaghan. Edward was the brother of Isabelle. Edward enlisted in the arm on April 8th, 1941 in Syracuse, New York. He had 4 years of high school and worked as a chauffer and driver. Edward, at the time of his enlistment, was single with no dependents. He had received the Air Medal Award with 5 Oak Leaf Clusters and the Purple Heart.


Please contact us if you have any information on Edward Monaghan