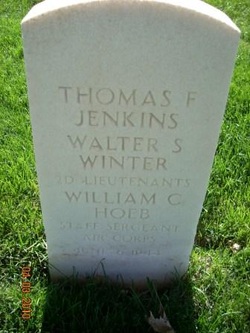 Walter was born in 1918. He was the son of Walter S Winter and his wife Hulda Johanna Isaksson. Walter was the sibling of Chester, Myrtle and Russell.

Lieutenant Walter S. Winter, husband of Mrs. Lorraine Philbin Winter, 1551 N. Waller ave., and son of Mrs. Hulda Winter, 4722 W Hubbard st., has been named killed in action on D-Day, June 6.  A graduate of Nash and Austin High schools, he was the pilot of a B-26 Marauder bomber.

RECEIVES MEDAL--Lieutenant Winter, who enlisted in the air forces Dec. 29, 1941, received his pilot wings last Nov. 3 in Blythville, Ark., and went overseas the first of April.  His widow has received the purple heart medal and citation.  He is survived by his widow, his mother, a brother, Russell, and a sister, Mrs. Myrtle Burke. - contributed by Eric Ackerman, Find-a-grave.


U.S. World War II Army Enlistment Records, 1938-1946 about Walter S WinterName:Walter S WinterBirth Year:1918Race:White, Citizen (White)Nativity State or Country:IllinoisState of Residence:IllinoisCounty or City:Cook Enlistment Date:29 Dec 1941Enlistment State:IllinoisEnlistment City:ChicagoBranch:Air CorpsBranch Code:Air CorpsGrade:PrivateTerm of Enlistment:Enlistment for the duration of the War or other emergency, plus six months, subject to the discretion of the President or otherwise according to lawComponent:Army of the United States - includes the following: Voluntary enlistments effective December 8, 1941 and thereafter; One year enlistments of National Guardsman whose State enlistment expires while in the Federal Service; Officers appointed in the Army ofSource:Civil Life Education:4 years of high schoolMarital Status:Single, without dependentsHeight:67Weight:133