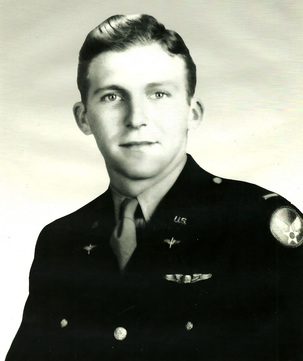 Emil Ostrowski was the beloved son of Adolph Ostrowski and his wife Lucy. He was a sibling to brothers  Henry, Adolph, Benjamin, Robert and his sisters Dianna and Elizabeth. Elizabeth remembers as a young child Emil's last visit home. He had just received his wings and was home on leave. The next memory is of the day when her parents were out a work, the door bell ringing and the Red Cross there to tell her of his death.  The family had mourned and missed him ever since.

Lt. Emil Ostrowski was the B26 Marauder copilot of the 42-96263 crew that crashed on June 6, 1944 after a mid air collision with another B26. Emil served as a 2nd Lieutenant with the US Army enlising on April 30 of 1942 in Milwaukee, Wisconsin.  His hometown was in Essex county, NJ.  Emil's civil occupation was as a semi skilled mechanic and repairman. He was single with no dependents at the time of his enlistment.  Emil's service ID number was 0-814957.

He had trained at the Maxwell Field, Alt, Bennettsville and Shaw Fields, S. C. Emil was commissioned the November prior to his death at Turner Field, Albany, G.A.

Emil was born in South River and graduated from the Plainfield High School, moving to Belleville five years prior to his death. His parents were living on Union Avenue there in 1944. Emil had been gone oversea's just three months before his death.

Lt Ostrowski, twenty three years old,  was buried in the Richmond National Cemetery, Richmond, Virginia on April 26, 1949. He was buried with James F Bechtler and Boris R Salimsky in Section 1c Site 5498.  Emil has been honored by the Belleville Sons Memorial. 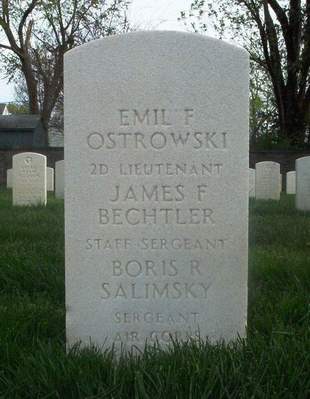 Photo of Emil provided by his family