The 394th Bombardment Group
from The University of Akron, University Libraries, Archival Services The B-26 Marauder Archives
and Aviation History 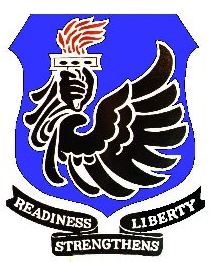 The 394th Bomb Group
The 394th Bombardment Group of the 9th United States Army Air Force (USAAF) was activated in February 1943 and during the 2nd World War flew missions in B26 Martin Marauder twin engined medium bombers from Boreham airfield near Chelmsford in Essex before being based after D-Day in France, Holland and finally Germany.

The Group was activated at McDill field, Tampa, Florida on 15th February 1943. It comprised the 584th (K5), 585th (4T), 586th (H9) and 587th (5W) bomb squadrons and the first Group Commander was Colonel Thomas B. Hall. The Group was equipped with the B26 Martin Marauder twin Pratt & Witney Double Wasp 2000 hp engined medium bomber with the Group's distinctive diagonal white sripe on the tail. The Marauder had a maximum range of 1,100 miles (about 6 hrs flying time), maximum bomb load of 4000 lbs, a normal crew of 6 - pilot, co-pilot, bombadier/navigator, engineer, wireless operator/mid upper gunner and tail gunner and a defensive armament of 11 M2 50 calibre machine guns.

The Group's aircraft left Hunter Field, Savannah, Georgia on 5th February 1944 for the European Theatre of operations and flew the southern route to make landfall in England at St Mawgan, Cornwall on 22 February and arrived at Boreham Field near Chelmsford in Essex, the first base in Europe, two days later. The ground crews arrived by sea at Liverpool, England and Glasgow Scotland and then travelled by train to Chelmsford to arrive at Boreham on the 9th March.

On 23 March 1944 the Group flew the first of 99 daylight combat missions from that airfield and earned the title "Bridge Busters" as their targets were primarily road and rail bridges as well as gun emplacements, airfields, railway installations fuel dumps and ammunition dumps successfully attacked.

The living quarters at Boreham were designed to house a complement of nearly 2,700 personnel.

On D-Day the Group flew two combat missions to Normandy in support of the invasion, the 1st against gun positions at Varreville near Cherbourg and the 2nd to attack the batteries at Mount Canisy near Benerville. Unfortunately four aircraft were involved in two mid-air collisions on this day with only one survivor from the four crews. A german V1 flying bomb fell near the main entrance to the airfield on 18th June 1944, making a huge crater.

In July Staff Sergeant Paul Mattis, a tail gunner, became the first medium bomber crewman to complete 100 missions in the European Theatre during his second tour of duty flying from Boreham.

The Group moved to this New Forest Advanced Landing Ground near the English seaside resort of Bournemouth on 29th July.  They were to stay here for just one month but flew 24 important missions. The Group was awarded the Distinguished Unit Citation for the excellance of missions in the period 7th to 9th August for "extraordinary heroism and determination in executing a series of arial attacks against five vital and strongly fortified targets in Northern France".  It was during this period that Captain Darrel Lindsey of the 586th Squadron lost his life but became the only member of the whole of the 9th USAAF to receive America's highest military award for bravery, the Congressional Medal of Honor. He was leading a formation of 30 aircraft to attack a railway bridge over the Oise River at L'Isle Adam, a few miles north of Paris, France when his aircraft received a direct hit in an engine. Captain Lindsey continued with the bomb run in lead position and and stayed at the controls to enable his crew to parachute to safety before a fuel tank exploded and the B26 crashed into a house.  A memorial now stands in the ground of the Hotel de Ville (Town Hall) at St Prix near the target.

On August 28th 1944 the Group moved to Tour-en-Bessin airfield (A13) near Bayeux in Normandy, France where the Group lived under full field conditions and flew a further 8 missions. on 25th September 1944 to Orleans-Bricy airfield (A50c), 9 miles North West of Orleans for a three week stay and another 8 missions. Yet another unsettling move on 10th October 1944 to Cambrai- Niergnies (A74), this time for the longest stay at any European airfield of 7 months when 132 further missions were flown. This airfield had been occupied by the Luftwaffe and was ironically bombed by the Group from Boreham on 12 May. The missions from Cambrai, mainly in support of the Battle of the Bulge in the Ardennes, were against "Fortress Germany".

The much respected and legendary Colonel Hall who had led the Group in combat for 10 months being awarded the Silver Star, Distinguished Flying Cross, Air Medal with stars and Croix de Guerre left the Group during the time at Cambrai.  In February 1945 the group flew 16 propaganda leaflet (in German with accurate news of the progress of the war and Allied Forces) dropping operations over German towns and cities. March 1945 was a period of intense activity with 48 missions flown in just 28 days as part of the 98th Combat Wing. The 271st and final mission was a leaflet drop on 20 April 1945.

After VE day the Group was assigned as part of the Army of Occupation and on the 7th May 1945 the Group departed for Venlo airfield (Y55) on the Holland /Dutch border previously occupied by the Luftwaffe. This was a huge airfield which the Group shared with 3 other units including the 397th BG.

In August 1945, the replacement of the Marauders with A26 Douglass Invaders commenced and the Group moved to Kitzingen (R6) airfield in Germany.  In September the Group was awarded the French Croix de Guerre with Palm for its excellant bombing with valor, determination, endurance and exceptional courage especially in the five weeks following D-Day in June 1944.  After existing for three long years the Group was de-activated on 15 February 1946 and, sadly, the remaining B26 aircraft stripped and then blown up with explosives.

And so the 394th ended with a commendable war record of 271 missions flown with over 9,000 aircraft sorties and over 13,000 tons of explosived dropped. This was at the cost of 344 casualties with 182 killed in action, 36 killed in accidents, 59 prisoners of war and 41 wounded in action and a total of 26(?) aircrft lost in combat.

Most of the information for this brief history has been obtained from the book "Bridge Busters - The Story of the 394th Bomb Group" by J.Guy Ziegler, a former pilot with the Group which is a comprehensive detailed history and is recommended reading. 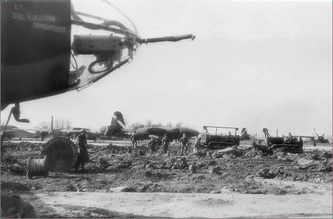 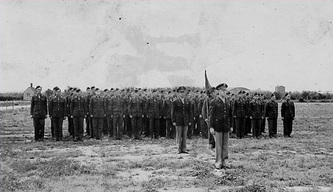 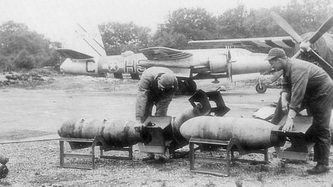