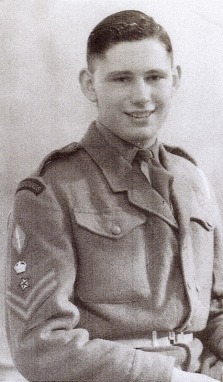 Photo to the right is of Ian Cheveralls taken in Cologne Germany,
March of 1945 Serving with the Royal Horse Guards Armoured  Division

These were two parts of a larger formation based in Essex, due for the German capital batteries at Verresville, Normandy, France. It was understood that because of heavy use of lower airspace they were forced to fly higher which caused problems, icing of the aircrafts.  The following is my actual witnessing to the events.

During the years of 1942-1944 I was a member of the Civil Defence - I was called up later that year. The civil defence was orginally known as ARP Battle Wardens who were under control of Mr. Stavert.

Our warden post was an old solid wheel wooden caravan - two bunks - solid fuel fire place/cooker with candles or oil lamps - entry through the rear by detachable wooden steps - which towed behind a steam roller and was used by the driver and night watchman doing the road works.  We were connected by telephone, when it worked, but to cover emergencies there were always one or two messenger boys.

The area around this part of Sussex was always busy with the troop movements and the German night bombers.  We were well versed in inceniaries, uxb ect, with the search lights scanning the sky.  On the night of question, I was on duty with Mr. Arthur Benge and Mr. Bill Lavender.  There was so much activity going on in the air, that much of out time was spent outside watching between the cloud breaks - the endless passage of aircrafts heading towards France.  Whilst we were certain it was the begining of the "Second Front"  no official announcement had been made.

It was around 05:30 hours on 6th June 1944 that we had been joined by Mr. Harry Thomas, another warden, along with Mr. Victor Hughs, our senior post warden, when a sudden screeching sound of aircraft, diving to the groud, everything shook.  It appeared to be coming from the direction of Whatlington airspace.  We then saw it half-turn to its right, heading directly towards us, we dived for cover.  With a loud crash the noise suddenly stopped.  The senior post warden tried to phone Watch Oak Headquarters, but the phone was out of service.  We saw a parachute coming down from the direction from which the aircraft came.  The chief post warden sent Bill Lavender and myself to the place we expected the parachute to land.  The shortest route was across the road over the hedge by Somerby Farm and headed towards Punch Bowl Meadows, going as fast as we could on foot, with a few falls.  We could hear somebody calling out "Johnny, Johnny".  When we made contact, it was the airman calling out for one of his crew.  We guided him back to the main road and back to the wardens post, I cannot remember seeing the parachute or where it went.  The police immediately took him to the police station at Battle.  By this time daylight was better and there was confusion as to whether the bombs were still in the aircraft, the airman was confused.  The marauder had crashed a t the rear of the houses in Barrack Firelds and hit an old ash tree and was well alight, the distance to the wardens post to the point of impact was 400-500 yards.  There was some confusion about what happened to the bomb load as the aircraft had not exploded on impact.  The head warden sent Bill and myself (we were the only ones with bikes) down towards Whatlington to report on any information or incidents.  We made our way downhill, which was clear until we came to a bend just before Ringletts Farm.

The situation was several holes beside the road, broken electric and telephone cables.  Right behind us appeared several Italian POWs, all in a state of distress.  My father James Walter Cheveralls appeared, who was a Land Baliff for Ringletts Estate and was responsible for Italian POW's.  With some difficulties he managed to get them back to Ringletts Farm.  He was around the farm buildings where the bombs fell.  He was making his way to report what had happened, all communications were out of service. Ringletts Farm stands back from the road so the number of bomb holes was not easy to access.

What it transpired that these holes were unexploded bomb holes and after further investigations around Ringletts Farm, the wood opposite and the entrance to a house called "Kilarney" were further UXB bomb holes.  For some reason not a building was hit, there were on the front lawn "Ringletts House" in the drive way, on the main roadside and between buildings.  What did come to light was the Italian POW's who were allowed to live on the farm and when the bomb dropped, one had penetrated the footpath outside the building they were living in.  They had taken fright and were about to run back to the main camp at Roberts Bridge when we arrived on site.  It was within hours that the "BDS" were on site.  Those bombs in the woods were detonated in situ, but others were dug out, the whole incident took a week to complete.  It was practise not to harness the bombs on long flight until close to the target.  Also because of the low position of the aircraft and the angle of the aircraft on release of the bombs, they may have not had enough fall to straighten, so the detonator in the nose did not strike the gound first as intended for concrete gun emplacement attacks on the French Coast.  It must have been a wise decision to jettison those bombs before the aircraft crashed, had it exploded on impact many of us may not have been here today, considering the damage caused by the explosion when the second aircraft crashed in Ashburnham.  There were no sruvivors at Ashburnham and none at Whatlington Road, except for the one who bailed out.  for many years the old burnt tree trunk was left standing, which indeicated how close the crash was to the housed backing on to Barracks Field.

I have given much thought to this incident over the years and started to investigate.  Firstly I obtained help from The American Historical Research of aircraft accidents 1918 to 1955, who confirmed that the two aircraft involved were on route to the German costal gun batteries of Varreville on the Cherbourg Penisula, from their base station 161 at Boreham in Essex on June 6th 1944, both aircraft were Marauders B26.

It is evident that the incident was due to weather conditons and the concentration of so many aircraft flying in different heights and it wasn't unusual at that time of the day to see an individual RAF bombers returning from their night mission flying low after encountering damage by enemy action.  Over the years and revisitiong the site on Whatlington Road and it became clear how many people could have been killed if it wasn't for the quick action of the crew to jettison their bomb load, probably only minutes or two before crashing.  In his roport, Lt Tommy Potts, the pilot and only survivor, gave these instructions and ordered the crew to bail out.  When I returned to the scene of the crash the bodies of the remaining crew were all at the centre of the aircraft in the position of the bomb bays.  The Battle Fire and Rescue Service and the police were at the scene in record time, our warden's post was so close, but we were not equipped to deal with undertakings.  It was not known until Lt. Tommy Potts stated on his landing by parachute if any bombs were still on board, but had given orders to jettison bombs - confirmed by our report from Ringletts Farm of UXB holes - although the Fire Service had controlled the burning of the aircraft, rescue operations were still in operation.

Looking now at the overall picture and taking a line from the airfield at Boreham in Essex and their intended destination of gum positions at Benerville, France. Had th e incident happened a few minutes later, that the aircraft could have landed in or near Battle town and it should be recogonised that had this happened, civilian casualties could have been considerable.  The quick and professional action of Lt Tommy Potts and his crew prevented this. The old ash tree which the aircraft crashed into prevented the direct crash on to the house known as "Long Branches".  This burnt old ash tree stood for many years.

At the present time we are trying to contact any relatives of both Marauder crew to inform them of our intention.  Lt. Tommy Potts survived the was but passed away in 1971. Some crew were buried at the American Cemetery in Cambridge, others were flown home to their families in the USA.

It was reported that some form of the disintegrated pieces of the aircraft which crashed and exploded on impact at Ashburnham place remain in branches of the trees and were blown down in the great storm of 1987. Needless to say, that considerable damage was suffered at Ashburnham place and the surrounding property, leaving a crater which is beyond doubt if a similar incident had taken place at "Whatlington Level" or Battle itself, the results would have been a catastrophe.  Thanks to Lt. Tommy Potts and his crew, minimal property damage and no civilians casualties were encountered.

I considered that no recognition for their actions has ever been given.  With the details of the crash site now corrected, and the saving of lives and damage, over the actual crash site in Whatlington Road.

Again on site, it soon became clear, that those brave americans who stayed on the aircraft to jettison the bombs could have bailed out, leaving the bombs on board - on direct course for Battle and built up areas.  Even at the same point of the crash many of us could have been casualties.  there is a strong possibility that the bomb doors were not functioning and the crew made the jettison of the bombs by manual means.  That is perhaps why five crew members were around the bomb bay door, as found in the wreckage of the aircraft.

After much thought and consideration, I wanted these eleven airmen and the sold survivor to be remembered.  I contacted Mr. Fred Barton, Chairman of the Battle Branch, Royal British Legion, who immediately gave 100% support of the project and arranged the events that followed.  After consultation and with help from the Royal British Legion, Battle Branch, a plaque in the memorial hall of the two crews who perished on that morning would combine both incidents.  It was suggested that a memorial be put on the actual  sites, but they would be unseen and two needed.  A joint plaque serves the need as both crashed in Battle. 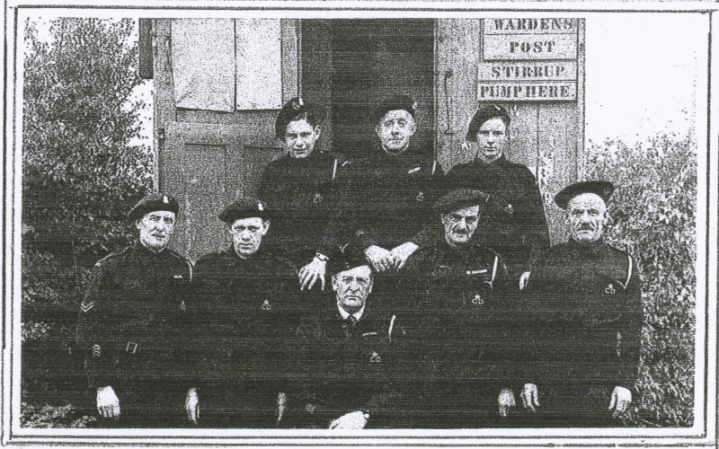 These men operated from Warden Post Whatlington Level from 1939 to 1945.
All witnessed the Aircraft crash of June 6th 1944
Ian is the only one of this group that survives today 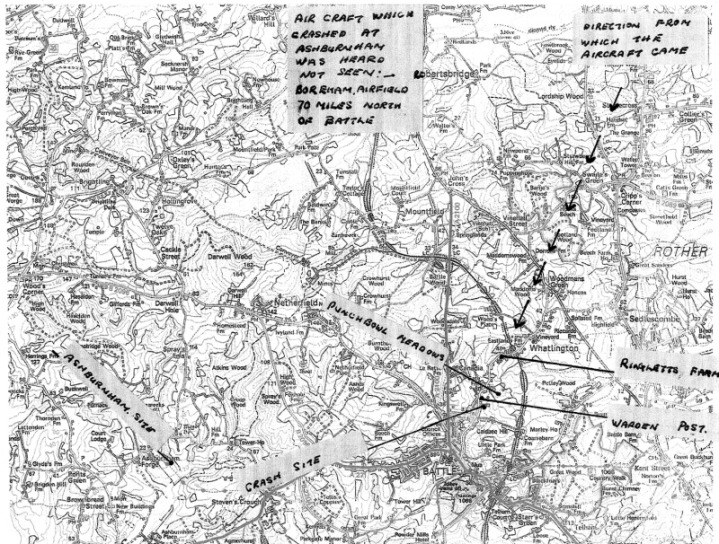 It is now, that the true details are to hand of this incident.  We can now remember these airmen, who, in true light of that morning with their devotion to duty gave their lives. - Ian Cheveralls 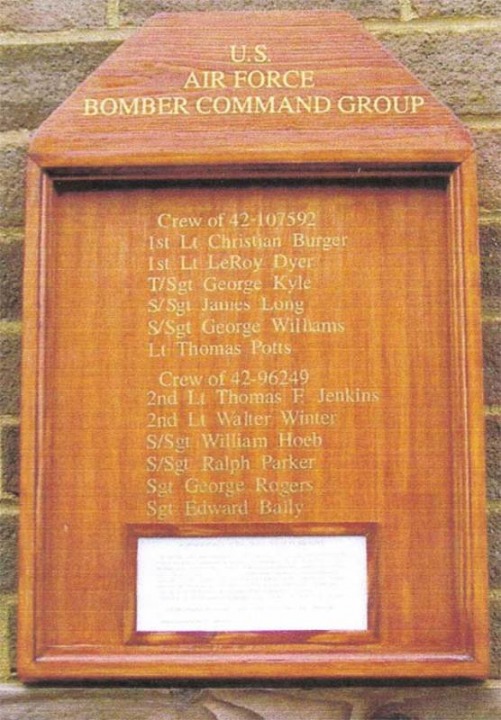