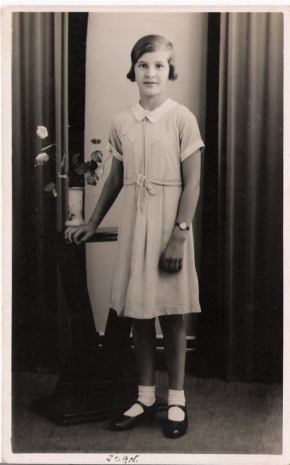 Joan Beatrice Ada Taylor was the daughter of George William Taylor and Beatrice Whittingham. She had two brothers, William George Edward Taylor and Earnest Herbert Taylor.  Their mother Beatrice passed away in 1928 from Tuberculosis. Three year old Joan was then raised by her mother's brother Bertie Whittingham and his wife Fanny Harden.

Joan was employed in the boot department of the Nile Road branch of the Gillingham Co-operative Society. She was also the member of the Bible Class of the Camden Road Baptist Mission.

Fanny, Bertie and Joan all resided at 61 Corporation Road in Gillingham, Kent, England.  On June 6, 1944 in the early hours of the morning the home was stuck by a WW2 American B26 Marauder bomber that had just suffered a mid air collision with another plane. Both Joan - 19 years old and her Aunt Fanny - 60 years old perished in this accident. They were asleep in their beds when the accident happened. Joan's uncle Bertie was on duty on top of the gasometer and had witnessed the plane fall onto his home.

There was a large civic funeral for both Joan and Fanny which was attended by many of the community including the Mayor of Gillingham. Floral tributes were in abundance. Unfortunately her brothers William and Earnie were serving abroad in the war and were not able to attend her funeral.

Information contributed by the Taylor Family